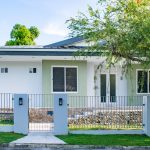 Intended as two self-contained high-end apartments within one modern building envelope, the building is divided into two levels of nearly identical residences. Access to both is via a shared lobby and stairwell, which becomes a focal point of the building’s elevation and marks its entrance. Each apartment has two bedrooms, a study and living area that extends onto a covered outdoor patio at ground level and balcony on the upper level. Tall windows and high ceilings allow light to flood the interior spaces at both levels with planters bringing an element of greenery within reach.  Large glass doors fold open to eliminate the boundary between interior and exterior spaces.

The building also features a large privacy screen that buffers the ground floor patio area from the upper level apartment. This timber screen also adds privacy from a church on the opposite lot, that sits at a higher grade. The property is shared by an existing building at the back, accessed via the main driveway. The intention was to create a separation between the two structures in the form of a landscaped patio area which could be used as a communal space.